Today the House Energy Committee got a visit from Al Gore… and he ruffled some feathers… especially those of Mr. Gingrich.

[Al Gore] said for example, the rate of new discoveries, is falling for energy. That’s factually not true.

Actually, Newt, it is true. And it has been true for over 60 years… and here’s the proof Newt: 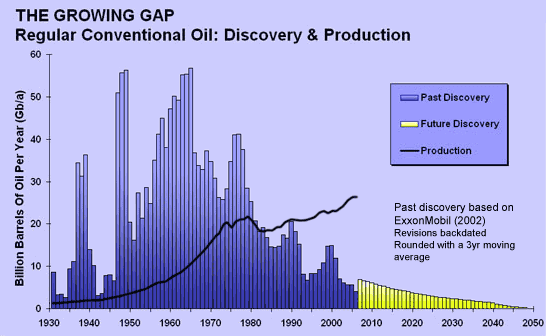 In 1965, 60 Billion barrels of conventional oil were discovered.

But Newt goes on:

In the last 3 years we have found (who is we?) have found 100 years of Natural Gas in the United States

That’s nice Newt. If I took only one sip out of a coke bottle every day then it might last 100 years as well. The question Newt, is not the amount, it is the rate. How much of the 20 million barrels of oil that the US consumes in a day can that “new natural gas” displace.

The answer, according to the US Energy Information Administration (PDF), is very little.

The picture for oil and oil substitutes like Natural Gas Liquids is even more grim:

From 2004 – 2007, 1.6 Billion Barrels of Crude Oil Equivalent were discovered of Natural Gas Liquids reserves. Yet estimated Production grew by 4 million barrels a year. That equates to 11,000 barrels of oil a day… roughly 0.06% of the daily 18 million barrel consumption in the US.

And finally, for crude oil…

From 2004 – 2007, -547 million barrels. Repeat. Negative 547 Million Barrels of crude oil were “discovered”….. in other words, we used it up faster than we discovered new stuff. Which brings us back to the graph above, the graph that matters.

I hope that clarifies things for you Newt. The party is over. I know you’ll never accept it… probably not even when either your country collapses under its own debt to oil producing countries, or riots erupt from gas shortages and skyrocketing prices… but at least there are some who get it.

And by the way, from 1997 to 2007 total estimated production of Crude Oil plus Natural Gas Liquids went from 3 Billion Barrels of oil a year, to 2.5 Billion Barrels. A drop of 16%.

Brazil can’t save you Newt. Even without the current global recession, production from the new Brazilian finds wasn’t going to reach its full potential of 1.1 Million barrels a day (400 Million a year) until, wait for it, 2017.

Lets see.. in another 10 years we will likely drop another 16%… another 500 Million a year… much more than Brazil could provide, if even it all went to the US, which it won’t.