The Islamic boogeyman has been eradicated by the forces of good…

mainly by these characters: 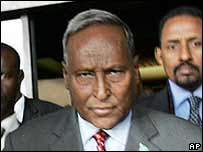 The same people who have done nothing but fight amongst themselves for the past decade, leaving Somalia lawless, and hopeless.

The UIC had brought what many Somalis considered law, order, and most importantly it seems, a sense of hope to the South-East of the country. (the North-West has been effectively independent though internationally unrecognized, and known locally as Somaliland, for a long time)

Now they’ve been runout by Ethiopian troops and the former warlords.

No one seems to know how Somalis in Mogadishu and Kismayo feel about the change of control now.

But hey, at least the “bad guys” got run out of town right?

Update: Here’s an opinion from a blogger in Somaliland… at the rather opportune, Somaliland.org:

I will not say much about the rest of the so-called Provisional (Federal) Government. (Actually, the ‘federal’ part is a misnomer. It has no federal pact with the only other constituent of the Somali Republic of 1960, which is Somaliland.) Suffice to say that its so-called president, the ailing Col. Abdullahi Yusuf (The Reptilian Colonel) is a hyena, while his so-called prime minister, Mr. Gedi, can be likened to a jackal. Now both the hyena and the jackal are in league with the king of the beasts of the Horn of Africa,
Mr. Meles. God save all the peoples of the suffering Horn of Africa!

I conclude this article by repeating what I have previously said elsewhere.
Namely:

1. Supporting Meles’ adventure in Somalia is counterproductive, and will not serve the interests of any nation, including the US and Britain, reported to be supporting Meles’ politics at this time.

2. The so-called Provisional Government of Somalia should be disbanded; to replace it, a fresh genuine conference of Somali communities should be held inside Somalia, not in another foreign capital to avoid another foreign-appointed government for Somalia.